On Sept. 19, 2011, 60,000 people gathered in Tokyo’s Meiji Park to say “Goodbye, Nuclear Power Plants.” This demonstration was the biggest in Japan since the 1960s protests against the U.S.-Japan Status of Forces Agreement, a military pact strongly tying Japan to U.S. Cold War policies. Among those marching through the bustling metropolis were mothers… Read more » 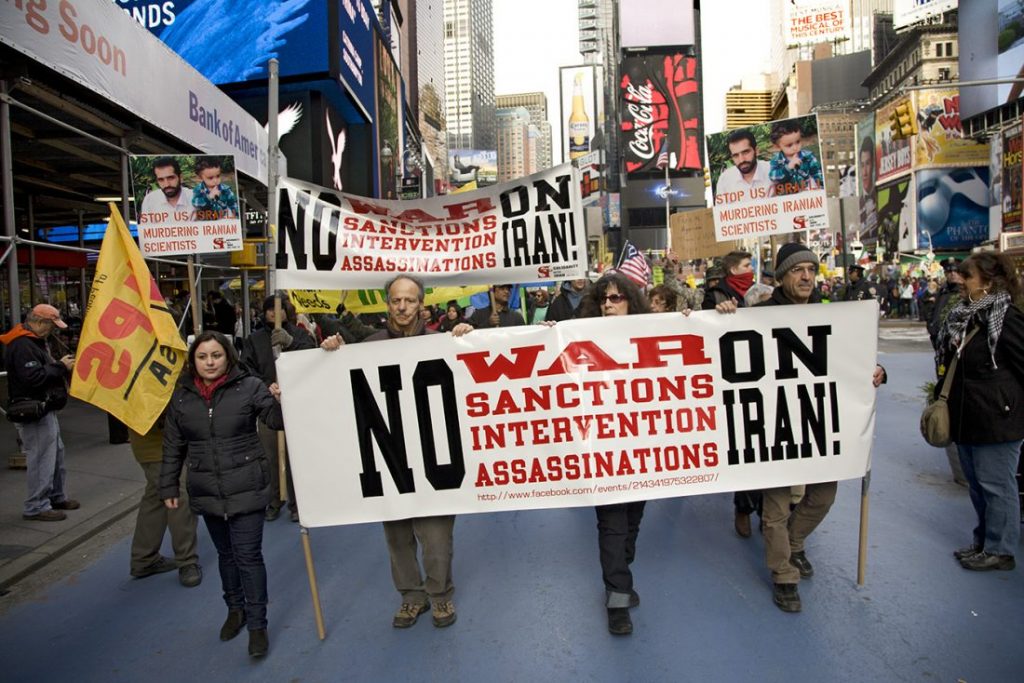 Is Iran next for US shock and awe?

This 2012 article discusses the underlying causes for U.S.-Iran hostilities, the triggers for protest within Iran, and the still-crucial need for a sustained U.S. anti-war movement.

FS editorial — New waves of resistance to US in Afghanistan

Powerful news from the Left Radical Organization of Afghanistan (LRA) alerted the Freedom Socialist Party (FSP) that the anti-occupation movement is rapidly expanding. Millions of Afghans — east and west, north and south — took to the streets in late February to denounce murderous events that month: NATO air strikes that killed tens of civilians… Read more »

No war against Iran — lift the embargo: a statement by the presidential ticket of Stephen Durham and Christina López of the Freedom Socialist Party

On July 1, following the lead of the United States, the European Union tightened its oil embargo against Iran. This is the latest step in a campaign to paint Iran as a nuclear menace — as a country that violates the rules regarding the production of enriched uranium, used to develop both nuclear weapons and… Read more »

The world was filled with revulsion when a Taliban shooter tried to assassinate 15-year-old Malala Yousafzai last Oct. 9 in Pakistan. How cowardly to shoot up a rickety school bus filled with girls determined to get an education! Outraged Pakistanis took to the streets with signs and shouts of “Shame on you, Taliban!” Soon after,… Read more »

Note: this article was written before Manning publicly identified as Chelsea Manning. The Freedom Socialist Party recognizes and supports Chelsea Manning’s gender identity. The year 2013 will be a busy one for WikiLeaks, warns its founder and editor-in-chief Julian Assange. He was speaking on Dec. 20 from the balcony of the Ecuadorian Embassy in London,… Read more »

According to the War Resisters League, the United States will spend $1.36 trillion of income tax revenue for 2013 on “defense.” That comes to 47 percent for costs of past and present wars. Why is a nation that once saw standing armies as a form of tyranny spending more on its military than every other… Read more »

Not one day passes without new torment in the Middle East. Israel brazenly bombs Syria, assassinates Iranian nuclear scientists, and invites the U.S. to nuke Iran. Civil war continues to rage in Syria, escalating tension and deadly turmoil in Turkey and Lebanon. Millions of war refugees flee for their lives to bordering lands. More than… Read more »

The president helped end the “Don’t Ask, Don’t Tell” policy that locked LGBT military service members in the closet. During his 2012 campaign, he reduced deportations of undocumented youth who came to the U.S. as children. But, with few other exceptions, his actions have served the wealthy elite and expanded the attacks on working people… Read more »

China, Japan and the United States scramble jets over air defense zones in contested waters between China and Japan. A Chinese naval ship nearly collides with a U.S. Navy cruiser. Tense meetings take place between top diplomats, and the U.S. Secretary of Defense reviews Japanese troops in Tokyo. And all of this just since late… Read more »